Angels in the Dark 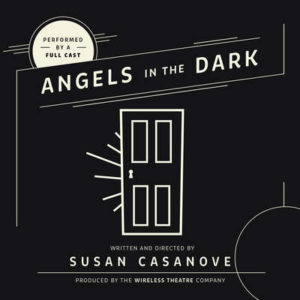 Roger Benezoscee is like the worst boss you’ve ever had times ten. What could possibly force this obnoxious, egotistical old megalomaniac to change his ways? Nothing short of a Damascene conversion? On a trip to Bordeaux organised by his PA, Cath, Roger unexpectedly finds himself facing the biggest challenge of his life. But will it change him?

Angels in the Dark by Susan Casanove

This innovative new mystery drama stars Kim Durham (Matt Crawford in The Archers). Fans of anagrams may like to ponder the significance of the character names: Roger Benezoscee, Cath Crobbit, Seth Treave and Leymar. ‘Dialogue in the Dark’ – the international exhibition in which small groups of people are escorted around a series of darkened rooms by a blind guide was the inspiration behind Angels in the Dark – a radio play set in total darkness.

For the full experience, we advise you to listen in the dark!