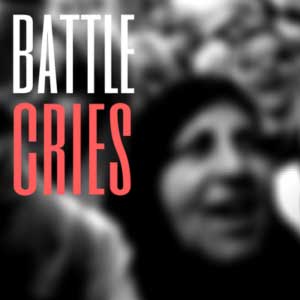 Following a revolutionary uprising in her country, “Battle Cries” tells the story of Amina, who flees the chaos of her home town, leaving her mother and brother behind in the increasingly volatile city. The two women’s accounts of their different experiences are interspersed with extracts from the Mu’allaqat of Antara – a poem embroidered on a cloth of gold and publicly displayed in Mecca in the 7th century. Battle Cries explores the themes of war, love and separation which are common to both the poets of 7th century Arabia and the more recent experience of the populations in the Middle East and North Africa.

A passionate writer of radio drama, Jane Downs has lived and studied extensively in the Middle East. The Arab Spring of 2011 inspired her to write a script, which would combine the traditional tribal poetry of pre-Islamic Arabia, with a female perspective of the uprising.